Holacracy in a represented workforce – Part 1

One of the questions that immediately came to my mind as I thought about the possibilities of a workable Holacracy governance model for public sector was, “Could a Holacracy coexist with a represented workforce?” When I first began learning about Holacracy, I heard things like “there are no managers" in this management system. And if there are no managers, I wondered, then who would negotiate with the Unions, which currently play such a prominent role for government employees in many sectors? Is it the case that no one is represented by the Union in a Holacracy, or is everyone represented? When I asked Brian Robertson, the co-founder of Holacracy, if there were any implementations of Holacracy in a represented environment, he said “Nope, you would be the first.” To which I responded, “Excellent, I love that position!”

This is the first of a two part blog post that seeks to raise some of the questions related to Unions and Holacracy. Part 1 touches on the first set of key questions identified, and Part 2 will explore some possible answers.

In the current implementation of Holacracy at the Office of the Chief Information Officer at the State of Washington, all of the staff are at-will, exempt employees, who are not represented by a Union. This is perfect because it allows me to explore Holacracy in government while incrementally pursuing answers to the litany of questions that arise when thinking about using a holacratic model in a union environment.

To date, I don’t have all the answers, or even all the questions that will answer the challenges I foresee, but the intellectual conversations to address the issues have begun.  Recently, I had the pleasure of hosting a discussion focused on the question of how a Holacracy could operate successfully with Unions.  At the table were Glen Christopherson, the HR Policy Director for the State of Washington, who has spent a number of years negotiating and resolving issues with Unions; Mark Lyon of the Attorney General's Office, who has logged twenty years experience representing Unions;  Michael Cockrill, the State Chief Information Officer;  Karilen Mays, our assigned Holacracy Coach from HolacracyOne;  Brian Robertson, the co-founder of Holacracy; and myself.

The goal of the meeting was to identify the high level questions and issues that will need to be addressed in order to implement Holacracy in a government with a represented labor force.  Although this meeting was a good start, there are some important groups that I will need to invite to this conversation as the idea of Holacracy in government becomes more plausible and evolves: 1) the Labor Relations Office (LRO), which are the labor attorneys that represent the State and work directly with the Unions; 2) the Public Employees Relations Commission (PERC), which arbitrates the definition of the Bargaining Unit that determines who’s in the Union and who’s not; and 3) the Union leadership itself that represents the employees.

To answer the question “Could a Holacracy coexist with a represented workforce?” you have to start with understanding the role of Unions, their objectives, and their interests. The role of Unions should be fairly obvious to anyone reading this: representation of member employees' concerns in the work environment. However, a Union's channels to achieve these ends and their interests may be less obvious to the casual observer, so I'll spend a moment on them here.

Unions have two primary spheres of influence when it comes to representing labor. The first is to represent employees in the work environment by mediating local management decisions and actions in problematic situations. For example, it may be the case that an employee who feels insecure in bringing up workplace concerns or who is simply uncomfortable articulating their concerns within the existing management structure feels more comfortable allowing a Union to do so. Union representatives, or shop stewards, in this paradigm serve as a means for employees to get help resolving issues or tensions within the workplace. In my experience as a manager in these environments, many tensions arise simply because of changing working conditions. Even positive changes can become a problem because positive change in one area can create negative change in another.

The second significant channel for Unions is to represent employees within global, authorizing environments, such as the Governor’s office and the Legislature. Successfully mediating laws, administrative rules, and policies that directly affect workers. I suspect that this is where Union leadership believe they can have the greatest beneficial impact on their membership and where larger, more systemic concerns for their membership are raised and addressed.

This brings us to the first area of interest: membership. A very basic reality for Unions is that in order to advocate for employees, they must have revenue to pay for the expenses to do so. It costs money to print up materials, compensate employees and attorneys, and operate their business. Revenue comes from employee membership in the Union. Therefore, the Union’s ability to influence is greatly related to the size of their membership, which is directly related to their sphere of influence.

Interest #2: Definition of who’s in

Related to membership is the next area of interest: definition of the bargaining unit. The bargaining unit defines who is in and who is out of a Union. Traditionally, this is defined by an organizational structure like “the IT department,” which can be clearly identified on an organizational chart. In this scenario, if you are in the IT Department then you’re in the Union,  and if you’re not then you’re not in the Union. Another description that is sometimes used are whole categories of work aligned with professions like “Electricians.” If you are an electrician in the company, regardless of where you are organizationally, then you’re in the Union and otherwise you're not. Union leadership wants to be sure that there is no confusion or ambiguity as to who they represent.

When management makes organizational changes by combining groups or assigning represented and non-represented workers to similar work, the result might be to create ambiguity in the definition of the bargaining unit, which creates issues for the Union and its members. One of the core tenants of Holacracy is the freedom for employees to pick work that align with their interests and capabilities. This flexibility and agility could create issues for Unions and employers if the Holacracy design doesn’t drive and maintain clarity of representation status as well as ensure fiscal predictability for the Union. So we will need to consider how the bargaining unit is defined in an organization which allows employees to freely move across roles.

Another area of interest for the Unions is demonstrating value. Unions want to be able to demonstrate value to their members in exchange for an employee's dues. A Union’s great value proposition is that they are able to effect change more efficiently and effectively than the employees themselves. This is easy to see when we are talking about effecting change in the authorizing environment because it’s not very easy or efficient for individuals to organize to an extent that they can influence the Legislature. In this case, organizing into a group and having someone advocate on your behalf just makes sense. The challenge with this channel is that it can be too far removed from the day-to-day operational reality of many employees for them to readily feel its value.

Demonstrating value in the local work environment is much more tangible to member employees because it addresses specific issues affecting specific employees when workers bring them to the Union. When the work environment is such that employees and management can come together and get behind a common purpose with both sides listening to and respecting each other, which is what a holacratic model encourages, employees (remember no managers!) can usually figure issues out amongst themselves without assistance from the Unions. This sounds great and is the work environment we all want. However, it can create a problem for the Unions that want to demonstrate tangible value.

If Union advocacy in the authorizing environment feels too far removed to create a perception of immediate value to them and their day-to-day reality is highly functional, then employees will inevitably start to ask why they are paying for Union membership at all. This creates the same interesting paradox for Unions as it creates for managers in both private and public sector. Their goals are to manage towards creating a functional, healthy work environment, but some dysfunction validates their existence and allows them to demonstrate value. 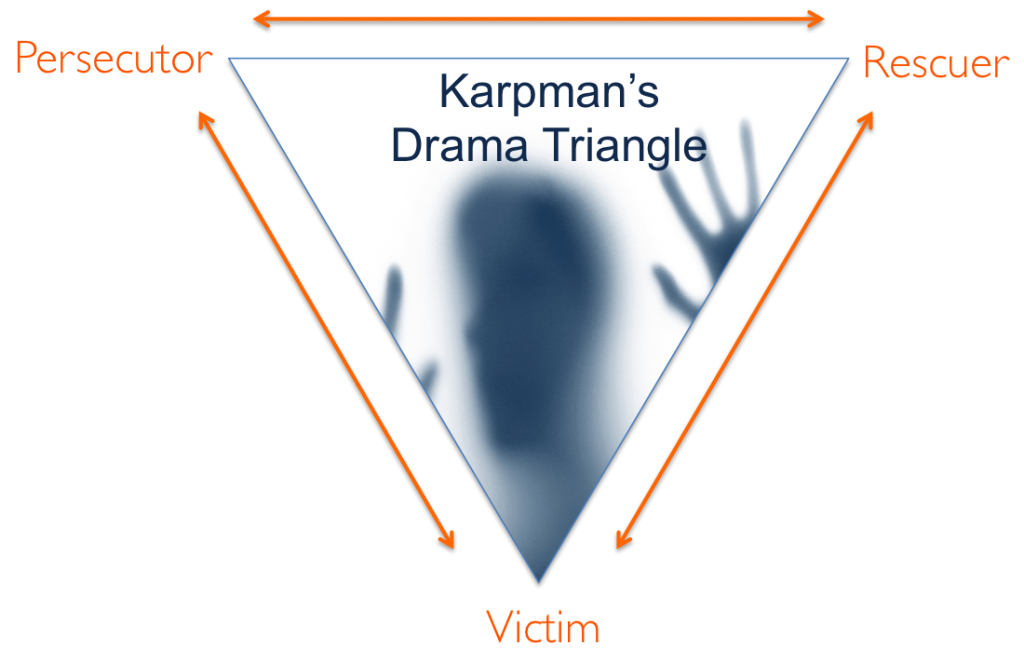 Extending this idea is useful as a thought exercise for the purpose of making a point. The primary value model for Unions requires that there be workplace dysfunction with three players:  an employee in need of help, management action (or inaction) that is impacting the working conditions, and the Union to come to the employee's rescue. Another way of saying it is that the model requires a victim, a villain, and a hero. This is referred to the Karpman Drama Triangle first described by psychologist Stephen Karpman in 1968. As mentioned above, I see this model playing out in every organization--not just unionized environments--with varying degrees of tension and strife depending on the attitudes and behavior of the players.

Holacracy is a governance model that doesn’t have managers in a traditional sense. With no managers there are no villains. Can we imagine this breaking the Karpman Drama Triangle?  Does the Union still have value if there are no villains? I’m reminded of a quote from the book The Last Unicorn by Peter Beagle, “Great heroes need great sorrows and burdens, or half their greatness goes unnoticed. It is all part of the fairy tale.” A similar quote from the perspective of the villain is from the animated movie Megamind: “Minion, I’m a villain without a hero. A yin with no yang! A bullfighter with no bull to fight! In other words, I have no purpose! Ultimately, the real question is: will Holacracy make it more difficult for Unions to demonstrate a value proposition for their members?

As I said in the beginning, the goal is to start the list of high level questions that need to be pursued when implementing Holacracy in a represented workforce environment. Here, I’ve described three questions and I’m sure there are many more to come as I engage more parties in the discussion. In Part 2 of the post I’ll lay out some potential high-level answers to these questions that came out of our conversation as a group.