Stevens County has a new broadband speed test and map. It's based on the same Open Technology Institute open source code as the Seattle broadband map, and it's launching this month at the Tech Expo in Colville, WA 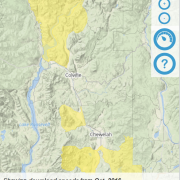 This fall a number of agencies have developed and published open data plans. It's been a great period for open data all around Olympia, and we're looking forward to even better as we go from planning to doing in the months to come.

Here's a quick dashboard of the plans from all around state government:

Here's an open dataset on broadband speed tests. It's from the mLab group, part of New America Foundation's Open Technology Institute.  They have an open API, but for demo purposes, I used the web interface to compare Washington broadband speeds to some US and foreign areas that I think are similar.

Mapping with Data.wa.gov (and others)

For a recent meeting I put together a step-by-step stroll through the mapping and sharing features of data.wa.gov.

We start with this map as a starting point:

Work session on Open Data and the Public Records Act in the House State Government committee on 7/12/2016.   The Open Data briefing is a StoryMap, available online here:  http://arcg.is/29v3x3W

The Washington State Arts Commission has been working to improve access to art since 1961. This is what they do

Open Data - What's in it for Libraries (Wa Library Assn)

Here are the presentations and handouts:

For National Library Week I'm dropping in at libraries near my meetings to try transform my work environment. Today I'm working from the Seattle Public Library's Northgate branch, following a morning meeting with the Office of the Education Ombuds.